The Foundations of the Twenty-First Century: by Philip Challinor 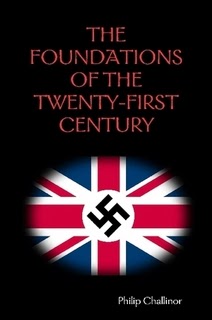 The year is 1989. The place is London. But the event... the event is the centenary of Hitler's birth, and it is being celebrated by Britain; not simply Nazi-occupied Britain, but a country almost fully integrated into Germany's Third Reich, embedded, as it were. The Royal Family still survives, suggesting an all-too familiar treachery; there are references to Isolationists gaining influence at the beginning of World War Two; the Russian front appears to be ongoing and claiming the life of many a British Volk soldier; and there is mention of America escaping the fate of Philip K Dick's The Man in the High Castle. Foreign tourists abound in London for the centenary, and all appears well on the Home Front.

Harold Cullen is part of a group of cadets who arrive in London to begin their courses and are seconded to assist with centenary duties, amongst other things - for in Nazi Britain the officious attitude of the stern corporal is king, and as punishment for youth and lack of rank, the group finds itself detailed to hand out leaflets, while billeted in a dreary but surprisingly large flat. The cadets are a mixed bag - while they are all keen to hone their Nationalist-Socialist zeal, Cullen seems particularly adept - for example, happily spying on fellow train passengers on the journey to London. Not content with this, he is also keen to explore the personal belongings of their landlord, whose flat seems rather more spacious than Cullen deems fit for a single man living alone. The landlord, Truman, well aware of what motivates the likes of Cullen, lets slips that his accommodation is reward for a special service performed for the Reich years before. But he remains tight-lipped about details, and this only furthers Cullen's curiosity. Perhaps Cullen's zeal can only be attributed to the fact that his grandfather also performed special service for the Reich, of which he is always mindful, chiefly because he is never allowed to forget it - not by his mother, his instructors, or by the other cadets - the exact nature of that service, however, is never shared with him.

The book takes the form of a first person narrative by Cullen, perhaps a journal of some kind, because each entry is dated. The prose throughout is terse, succinct and, at times, a little conspiratorial. All the pettiness of life in Britain is combined with the perversity of Nazism, and they are found to be compatible, collaborators, familiars even. The language reflects this in turn of phrase and figure of speech - phrases are jackbooted through the text as slogans (blood always tells), figures are uniform and correct. It captures ideology not only as a way of life, but as a mode of self-censoring forethought - as interior life. However, Cullen's narrative gives the impression of being a little too correct - at least at first. He has an eye for the disloyal; but he also has a disarming eye for the loyal. He sees and reports contradictions, anomalies, pettiness and even ideological doubts, all of which take various forms; and his crisis, when it comes, is an almost willfully perverse and unwelcome development in his career. It is as though we are not the only people looking over his shoulder.

Up to this point, there appears to be almost no resistance, except perhaps in one regard: the near-forbidden knowledge of another event, uncelebrated but seemingly unforgotten, and which can be pieced together from clues and hints scattered throughout the text, variously as allusions, threats, boasts and anecdotes. Who, for example, are the mysterious "hoaxers" hiding in plain sight on the London Underground? Just what was the supreme service rendered by Cullen's landlord to the state?  Even the early reference to trains running on time assumes ominous significance, once the reader has pieced together the subtext. Usually, in alternative history, authors game their point of departure - it is built into the text as a twist or a hook. But here, no such point of departure matters, and there are no safe games to be had from a reveal. If anything, history and its alternate converge in the opposite of foregrounding - as a defining back shadow which haunts the text. F21C transports its themes by more than train of thought: the final, almost hallucinatory journey is anything but that - it is the culmination of everything we have seen and heard: in Cullen's history, and in ours.

As for resistance, in a way Mr Challinor performs a remarkable feat: in a book which so cleverly transports the reader, the thought occurs - if history is written by the winner, who writes the alternate history? The dissident perhaps.
Posted by J McEvoy