The Voivode: by Philip Challinor 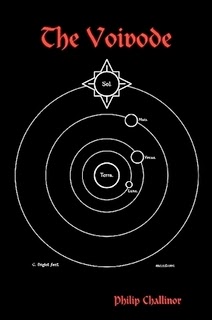 In Philip Challinor's extraordinary novella, The Voivode, vampirism is in league with the pre-Galilean universe, and its enemy, the Church, is mired in the dark ages. The spacecraft Persephone, lifted into the void by the burning of ten thousand or so heretics, attempts to venture beyond Earth's furthest satellite, Sol. Instead it finds evidence of the Gililean universe in the form of a new planet that appears to orbit Sol; and it finds itself under siege from within, as a stowaway vampire lays waste to the crew with the help of the ship's doctor. Sangruel the vampire and the doctor change the Persephone's course to land on this new planet and claim it... but it claims them in the most curious and horrifying manner.

At the heart of The Voivode is a bloody transfusion; that is, a protectionist exchange of knowledge and of power. Earth's enlightenment is to be more of the same, on an industrial scale, as Challinor reveals the newly discovered planet to have been asset-stripped of its only resource, blood, which is, after all, the currency of vampires. Blood cells converted to coin.

The Voivode, like most of Challinor's work, is precisely rendered. There are touches of Ligotti and Lucius Shephard (The Golden comes to mind); in fact, the prose is better than the former and the conceit fully matches the latter. It is a major work of strange and vivid imagination, and in subjecting cosmic horror to economic rationalism, Challinor has found a wholly unique voice.

You can buy a copy of The Voivode here - I absolutely recommend that you do.
Posted by J McEvoy