I, Mengele: by Philip Challinor 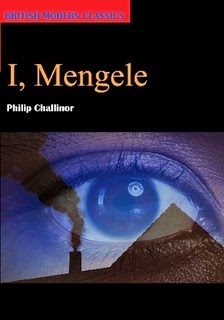 Following on from the author's Foundations of the Twenty-First Century, Philip Challinor's I, Mengele is a rare look into the academic and culture wars of an alternative history. F21C created a world in which Britain had fallen to the Nazi's during World War 2 - it succeeded by sidestepping the gaming mechanics of most alternative histories, instead concentrating on a curiously deft fit of Nazi politics and philosophy into daily English life. The book avoided epiphanies, deliberately so, except perhaps the resolution of duty into horror by means of a narrative that I would describe as speak into memory; by that I mean again that history is written by the winner.

I, Mengele is drawn from the same alternative history. It is a critical study of an epic film, conceived in Germany, financed in Hollywood, made in Britain. In our history Mengele is famous, or rather infamous. In that history Mengele is neither; victory has rendered him an almost anonymous functionary as the Holocaust has been overlooked by historians of the Reich for obvious reasons. All this is about to change as the cultural custodians of F21C take ownership of some of the less daring yet equally important actions of the war years. But how can mass-murder be reimagined as heroic service to the Reich?

Mengele's life and exploits are presented as epic fantasy, filmed in the manner of Tolkien's Lord of the Rings. Herein lies the power of the author's imagination: Mengele's victims are become CGI monsters. They are recreated as writhing hordes and dark inhuman masses. Jews, Russians, Gypsies... all are thrown into the CGI melting pot to emerge as the villains of epic fantasy as we know them - the faceless armies of Mordor, or the boundless hordes of Mallorea. As someone who has always found much fantasy to be faintly distasteful, this came as something of a revelation for me as it pinpointed my distress. Perhaps the most striking comparison to be made is with Norman Spinrad's The Iron Dream. It hadn't occurred to me until I read I, Mengele that Spinrad's novel can be read similarly - as an attack on the dehumanising East/West divide in fantasy fiction.

The book also provides fascinating background detail, including Churchill's cribbing of Hiro Hito in his surrender speech; and the timetable for the invasion of Russia being moved forward by three crucial weeks to June 1st, just time enough to get the Wermacht to Moscow before Christmas, 1941. It is interesting to compare such details with David Downing's The Moscow Option, another front rank World War 2 alternate.

Ultimately I, Mengele demonstrates that a commentariat can make almost anything acceptable if its cultural context is engineered to reflect the prevailing political consensus.

You can buy a copy of I Mengele here, and its companion volume The Foundations of the 21st Century here.