The Darkest of Nights: by Charles Eric Maine 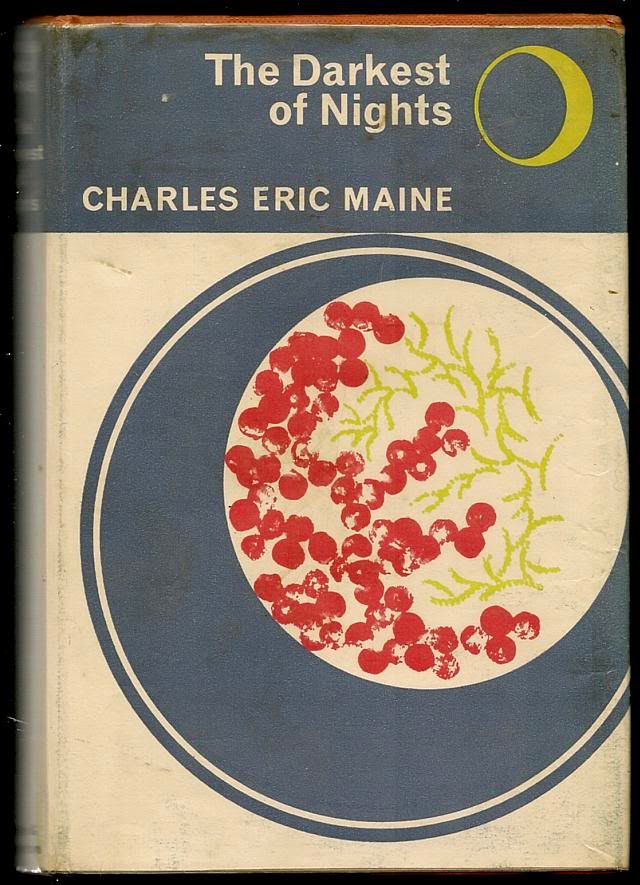 Although now sadly forgotten, Charles Eric Maine was one of the most successful British sf novelists of his time. Several of his books were filmed, most famously The Mind of Mr Soames in 1970, an attempt perhaps to cash in on the success of Charly. Unfortunately, Soames stars the insufferably 60s Terence Stamp, so I doubt I will ever get around to watching it.

Between 1958 and 1962 Maine turned out two major apocalypse novels - The Tide Went Out and The Darkest of Nights. The former is a rather quaint disaster novel in which nuclear tests cause the earth's oceans to drain away into Atlantic and Pacific fissures, leading to ecological disaster and societal collapse. It is a book that retains many excellent pulp credentials despite, or perhaps because of, its premise. The Darkest of Nights is an outstanding apocalypse novel and, to my mind, the definitive plague novel. While it shares many characteristics with the apocalypse works of John Wyndham and John Christopher - it is more artful than The Day of the Triffids, and more cruel than The Death of Grass - it is a true original in the sense that its characters act out the functions of pathogens, rather than simply being victims or not, as the case may be.

The Hueste virus, a possible side-effect of nuclear testing, begins work in China, killing millions of people. The outside world looks on, not entirely aghast as China is remote and the casualties there make splendid statistics with which to sell newspapers. The plague soon spreads to Japan where Pauline Brant, attached to the International Virus Research Institute, deals with the first of the casualties. She returns quickly to Britain to deliver samples and also meet with her estranged husband, Clive, Foreign Editor of the Daily Monitor, who solicits information on the plague and also a divorce. As the plague spreads across the Far East, the Brants part, Pauline to a virus research group, Clive to his newspaper and a frustrating round of new secrecy laws - why are massive incinerators being built in public parks? why are underground bunkers under construction in all major cities? The answer is, of course, obvious, but now routine censorship means that the population cannot really conceive of the scale of the Hueste virus - fully half the world's population will die, and the British establishment is keen to keep this a secret until it can secure the means for its own survival. Clive resigns his newspaper post and takes a job with an American television company. As the full force of the virus hits Britain, Clive and his American crew film much of the ensuing chaos and disorder for posterity, as it becomes open rebellion and then revolution. However, there is little for the population to rebel against as, in a piece of plotting later borrowed by Peter Van Greenaway for his novel Graffiti, the heads of government, business, industry and finance, and their extended families, are safely placed in the newly-built bunkers, complete with air filters, medical supplies and staff, while the rest of the nation is left to take its chances with the virus. As in Graffiti, these bunkers are set upon by an insurrectionist army, led more by outrage than by the prospect of imminent death, and the ensuing civil war is repeated across the globe. Pauline is detailed to serve in a bunker in Liverpool which manages to resist attack; Clive fares less well - his film crew is killed and he is captured by the rebel army. By now the situation is chaotic - there are not only revolutions and counter-revolutions, but medical advances mean there is virus and anti-virus; sadly, perhaps deliberately, the anti-virus is as lethal as the original virus, so those who survived Hueste are vulnerable to its cure; these too die in their millions, until victory for either side becomes a simple matter of attrition. Eventually, Clive and Pauline are reunited, but only so that one might cancel out the other.

In the end The Darkest of Nights resorts to Clive as a measure of civilised behaviour - somehow his character, presented as vain, scheming and ambitious at the beginning of the novel, is redeemed, not by a personal change in the man, but by the deterioration of his fellows. Clive becomes a civilised outpost, resorting only to outrages which have some semblance of moral continuity - some sensible looting; a revenge killing or two - and this continuity helps him revert to the status quo when it comes to a final choice as to whether to side with the insurrectionists or the government, no doubt taking many a reader with him. Maine's strength as a writer is that he makes us aware of this choice. Maine also has a happily informative prose style - he is able to impart huge amounts of information in just a few lines. This is not info-dumping on his part; rather he is interested in how things work, and he makes them interesting for the reader by infusing them with every detail of craft.

Maine's work was published in hardcover by Hodder & Stoughton throughout most of his career, and these 1st editions are well worth picking up, especially The Darkest of Nights with its fantastic petrie dish cover illustration by John Woodcock. My copy has the added attraction of an internal stamp reading RAF Leconfield.
Posted by J McEvoy